How do I contribute to a repository? #

Hello there! Here is a guide for the beginners who want to contribute!

If you want to learn more about contribution, read further.

To contribute to Athena first of all, please have a look at contribution guidelines which can be found here:

Contributing to the Athena Framework follows a very specific philosophy.

When you want to contribute new features, code, or introduce something new to the core of the Athena Framework you need to consider the following.

Is the feature that has been written something that all developers who are using Athena can utilize?

Here are a few examples of what could ben written instead of writing a feature directly.

What makes Athena easy to use is that we introduce features that let you build out more complex systems quickly without having to figure out the hidden complexities of that system.

We want developers building on top of Athena to have very fast turn around times for new features.

So the idea behind contribution is basically that you have a feature branch in your own private repository of Athena.

You'll need to test features you want to pull first locally, also you will need to bring the changes to your own custom repository first.

This is usually done through the usage of Git.

You will find examples in here of how its done through the Terminal in Visual Studio Code, PowerShell or GitBash.

To fork a repository, you'll need to go to the URL of the repository you want to fork. Afterwards you can press the fork button in the upper right.

Here's an example of how it will look like:

Since athena is always based on the latest dev-branch, you should have an idea of how to switch branches.

Basically branches can be switched by

This requires you to have an fetched upstream with available branches.

I would highly suggest that you learn to use feature branches for public contribution. Here is an example of how it is done.

How do i add a file to the git-commit stage first?

into your favourite console.

This will create the feature branch in your private repository

If everything is correct you will now see the new branch in your private repository and you can start a pull request from your own repository. 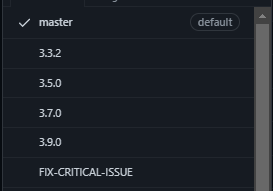 You need to switch to your newly created feature branch, go to the pull request section and press New Pull Request

You will see a window, where you can change the base branch and your own custom branch.